If your business has ever expanded to the point where you’ve wondered, “Should we create a new brand for this segment of our business?” this article is for you.

We’ve had this kind of conversation with many customers, and there are pros and cons either way. Here are the four factors we consider when making this strategic decision.

After considering these factors, is at least one of them different enough to justify a separate brand? If so, there are several advantages to launching the new identity.

Here are examples of Accent Interactive customers that decided to create a new brand or new website for some of their services.

We understand that your business is like your child. If your company has grown up, and it’s time for one of its distinct services to become an autonomous person, we’re ready to help it take that step of maturity.

Kim’s original logo was created when her non-profit was newly formed. Once women had gathered in Kim’s living room for talk, study, and encouragement; now they were gathering across the United States in homes, churches, and offices. Once Kim had spread her message with weekly emails; now she had published several books and booklets and was in the process of digitizing her curriculum series for U.S. distribution. This organization had indeed grown up.

But its logo had not. It had a Barbie-look about it that didn’t match our client, who radiated elegance, warmth, and authenticity. Neither did it match the women serving alongside Kim. These were active, roll-up-your-sleeves, get-real women. Kim needed a logo that was true to herself and the people she was reaching.

The name of Kim’s ministry—Roses and Rainbows—was soft and girly. Yet Kim’s core message was anything but. She helped women move from shame and defeat to strength and confidence. We decided to capture that transformation with strong typography. Then we tempered the strength a notch by playing with opposites: upper case versus lower case letters, strong type versus delicate filigree.

Not Every Picture Tells a Story

Words like roses and rainbows almost demand to be illustrated. We had to ask, “What will a picture of a rose or a rainbow add to the message of the logo?” The answer was, “Nothing.” The words alone get the job done. The filigree subtly mimics roses without overcomplicating the logo. Simplicity wins the day.

But Can It Scale?

Logos today are never used in just one medium and just one size. An effective logo must look good on letterhead and business cards, in a web banner, on video, on social media, and more. An aspect of creating a more mature, sophisticated logo was to ensure it worked in different sizes, different applications, and different colors (black and white, for instance). It seemed to us that if Kim could do it all, then her logo needed to be able to do it all too!

A Logo for All Seasons

Our client had outgrown one logo. We didn’t want her to outgrow this new one for a long, long time. By creating a logo that is true in tone and style to Kim’s essence, and by keeping it simple and versatile, we gave her a logo almost as timeless as her message. 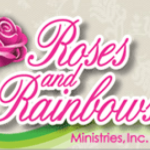 A business card is the shortest story a business can tell about its identity. When Resolution Resources asked us to design their business card, we knew their identity: We had designed their website. Our challenge: capture that identity on 3.5” x 2” cardstock.

Milk what you’ve got.

In Resolution Resources’ existing logo, two speech bubbles capture the essence of every argument: “Are too!” “Are not!” We amped up the visual impact of that logo with human silhouettes that display the posture of dispute. Strong-contrast colors capture the sense of coming from conflicting worlds.

Bend over to stand out.

Companies market to get attention. One way to get attention with business cards is to fold them. You get instant elevation with a card that can stand on its own. And you get the benefit of interactivity, something a flat piece of paper rarely allows.

A folded card offers twice as many spaces to fill while keeping to a standard size. Avoiding the temptation to clutter that space, we chose instead to keep the inside contact information simple and readable. In other words, user friendly. The outside space’s strong visuals stamp Resolution Resources’ identity on a potential client’s brain: These people can help us resolve conflicts.

See for yourself. Is the client’s identity clear? Does the card stand out in the right ways? In what ways do your marketing materials help you stand out from the competition? 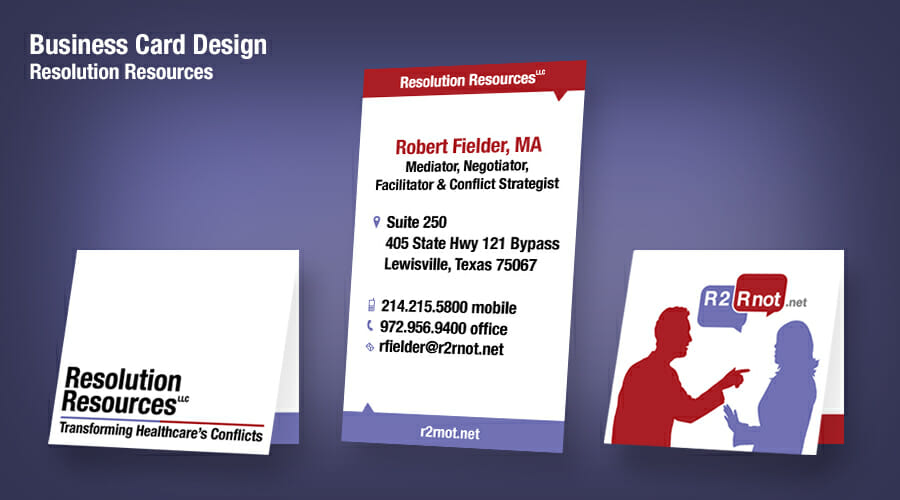 Some marketing consultants want you to obsess about your brand. I think that’s a mistake.

What a Brand Can Do

A brand is fundamentally what people think of your business—your reputation, your promise. A brand serves a purpose—it’s a mental image of who your company is, what makes you different, what value you offer. It’s meaningful to customers because it helps them make decisions about when to hire you for one of the many jobs to be done (Jobs to be Done, Clayton Christensen). But customers care more about getting their job done than they care about your brand.

What a Brand Cannot Do

The problem with spending time and energy on your brand/reputation is that you don’t have direct control over it. Your reputation is the sum of what you deliver—what you do, what you make, how you interact with your customers.

How to Succeed in Business

Instead of focusing on your brand, focus on delighting customers. Find out what job they hire your product or service for and get busy improving that. Make them so happy they want to talk about you. And create good marketing materials that help them do that.

Let your customers handle your brand.

And get back to work.

Hereford Bed & Biscuit came to us needing a sign for their newly revitalized company—a dog kennel in North Baltimore County. But if you don’t yet have a logo, how do you design the sign? What would it be like to design the logo with the sign in mind?

Our solution blurs the line between sign and logo, creating a logo that sits like a sign wherever it goes. As such it emphasizes that a dog kennel is meaningful for its presence in place and time. Hopefully a place where your dog can have the time of his life.

Have Trade Shows Made a Comeback?

Find out if trade shows have made a sufficient enough comeback to justify attending in person.