Robert Fielder specializes in conflict resolution, but his company, Resolution Resources, was experiencing its own kind of conflict—in marketing communications. His story reveals essential lessons for marketers and business owners.

One thing a website doesn’t tell you is how well it resonates with the target audience. For this, you need feedback from people. When Robert talked to trusted people in his network, he realized he had a communication problem.

They thought of him as a resource for specific situations such as contract negotiation and mediation. But what they didn’t perceive was how helpful he could be with the big picture, the strategic planning and facilitation that address systemic issues in organizations.

The irony is that this strategic level is where Robert offers the best value, but even people close to him didn’t understand that he offered this. Though he described all the services included in this category, the words “strategic planning and facilitation” were not prominently listed on his website!

This kind of communication breakdown really bothers us. He was losing business not because he wasn’t the man for the job, but because the marketing message wasn’t a true reflection of his services. We partnered with him to fix this.

How often have you checked with your market to see how well your message is landing? Is it time to look at your service menu and refine the message?

We decided to restructure the services he provides, simplifying the menu into just three categories. Then we created a new page for this higher-level service (strategic facilitation) and he started writing some content for it. 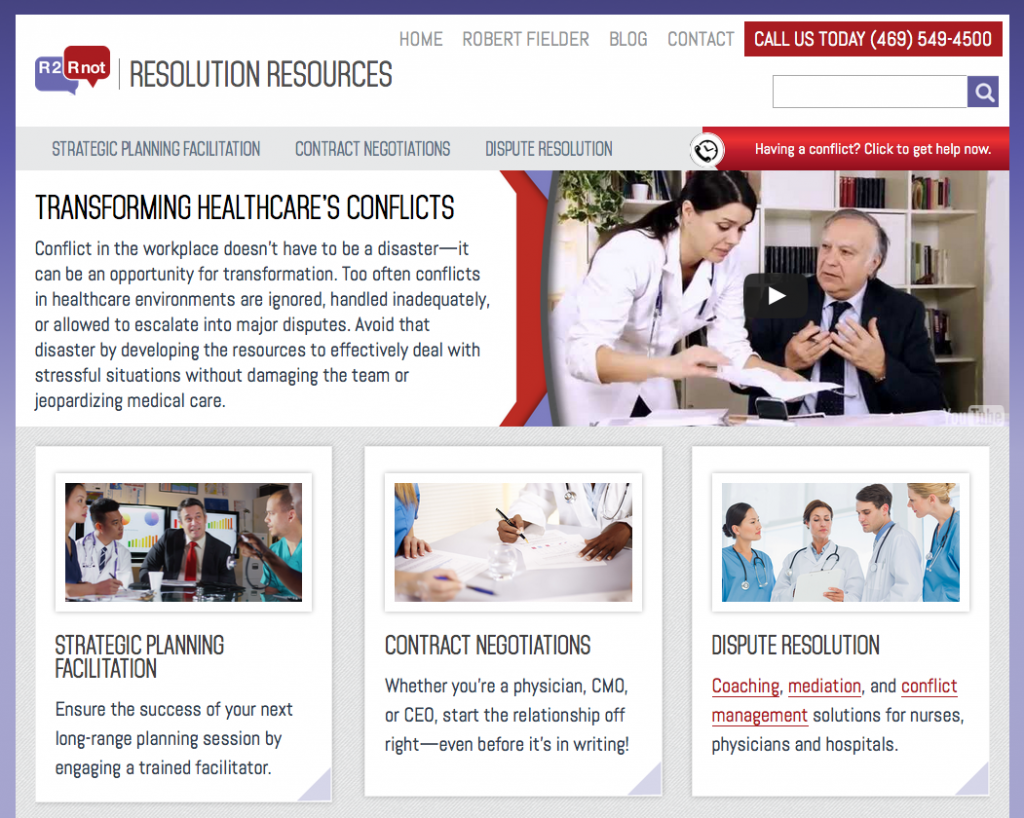 Motion and Light: A New Video

After Robert drafted the strategic facilitation content, he had the same idea that we did. It sounded like a video script! “Your writing sounds like your speaking,” observed Ken. Agreeing that this message would be more compelling when spoken, Robert wanted to make a video for his redesigned website.

In the end, Robert was pleased with how the video turned out. “It was a good way to take advantage of my presentation skills,” he observed. “It brought motion and light to my message.” We think it’s smart to engage customers in a way that text alone can’t.

Robert also experienced the benefits of collaborating with a creative team. Take the video script, for example. “If we had taped what I originally wrote, the video would have lasted 20 minutes,” Robert observed. “But you helped me get it down to 3 minutes, without losing the passion.”

Robert knew that as the subject matter expert, he played a key role in the process. Even though it seemed overwhelming at first, his job was to start generating content.

“What made it easier was realizing I already had parts of the content in various places. I just needed to find it,” mentioned Robert. He started looking for the messages he had already written—buried in emails, brochures, and letters. Simply copying and pasting from those sources got the ball rolling.

Robert’s early drafts were rough, but his objective was just to get all the stuff out. “I realized my writing didn’t have to be perfect,” reflected Robert. “Writing a first draft is mud on the wall. It’s a mind dump. It’s more important to be comprehensive than refined.”

“I wasn’t surrendering control by collaborating,” shared Robert. “I was really being freed up to just focus on what I wanted to say, not getting distracted about how I was saying it.”

Collaborating with a Coach

Robert also pointed out the advantages of working on a website with a professional coach. “Creating content for a website is an introspective exercise,” said Robert. “It’s not easy. But working with a coach, who is trained in listening skills and asking good questions, helped me uncover what I really needed to communicate.”

“What’s the return on investment with a website redesign? It can be challenging to determine,” said Robert. “There’s no guarantee it will attract new customers.” But making the investment, he realized how well it prepared him for new opportunities. In fact, just a few weeks after the website launch, one such opportunity emerged.

“I had the chance to become a preferred provider for a statewide healthcare organization,” Robert recounted. “As I was being evaluated, having the website and video ready added real substance and strengthened the case for my selection.”

Sharing what he learned about marketing communication, Robert explained, “You have to continue to look at your website with a critical eye—what you’re saying and how you’re saying it.” The key was listening to his network and adjusting his marketing message based on their feedback.

And with a wise word to other business owners, Robert advises, “Prepare for success before the opportunity comes!”

If you’re thinking about how to market your business more effectively, our team is ready to help. Whether it means creating a video, editing your early drafts, redesigning a website, or even re-thinking the entire marketing strategy, we enjoy the challenge of resolving communication problems and growing your business.